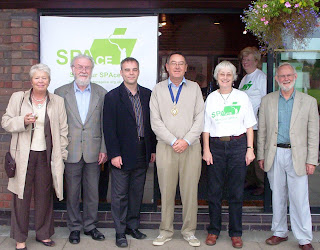 Yesterday afternoon I attended the launch of Leamington SPAce a new organisation to campaign against the growing threat of developers building on our green open spaces.
In recent years we have seen fine old buildings and back gardens torn down to make way for high density flats. Now our Cricket ground and allotments are under threat.
Now clearly there is a housing problem across our region, yet I feel we need to look at other ways of addressing this than simply packing more homes into our towns. If we do not protect our green spaces then towns such as Leamington and Warwick will loose their character. I am seeing some appaling developments in our towns. We cannot continue to rush into developments we will regret in 20 yeras time.
This is a non-political organisation, however it was supported by Lib-Dem's from Leamington Spa and I was able to arrange for Phil Bennion to attend. Phil is pulling together the Lib-Dem response to the Regional Spatial Strategy which will determine how future decisions on development might be made in the future.
Posted by Alan Beddow at 3:16 pm

Good luck with this campaign Alan, Leamington is a beautiful town and should stay that way.