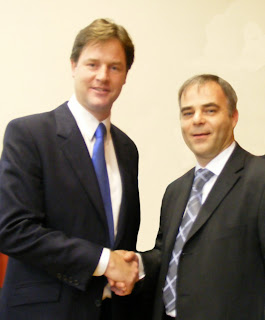 Today Nick Clegg was elected as the new Leader of the Liberal Democrats. This was a close run contest and a tough choice at times. I supported Nick for the leadership as I felt he has what it takes to really engage with people who may currently be disillusioned with politics.

I have heard Nick speak on many occasions and I believe he has what it takes to excite people in politics, he certainly excites me. People are switched off by politics becoming more remote, more controlled by Westminster and they feel powerless. Labour and the Conservatives have little new to offer and there is no longer any choice between them. Less and less people are voting and quite frankly I don’t blame them.

With Nick Clegg the Liberal Democrats will give people an alternative, we will make liberalism connect with people in Warwick & Leamington who share our values, but do not yet vote for us. Under Nick’s leadership we will campaign to give people more say in the decisions that affect us all.