Last night I took part in a Question Time style debate on Climate Change as part of Warwick University’s ‘Go Green Week. The panel included representatives from each of the main parties, and a couple of experts on climate change.

The event was very well attended and there were some challenging questions from the audience.

Neuclear Power
The first question on Nuclear Power provoked some debate, with Jayne Innes from Labour taking the view that the decision to invest in new Nuclear power stations was the right one. I felt the general mood of the panel and the floor favoured our position that the money could be spent more effectively on a broader range of renewable options without increasing our already huge (£70Bn) cleanup costs from the power stations we already have.

Too Much Stick & Not Enough Carrot.
The second question asked how we could encourage people to change environmental behaviour. The panel outlined a broad range of measures from education, government and industry and I made the point that I would like to see a lot more carrot and a little less stick. I feel this is especially true of transport. Whilst tolls, congestion charges and other measures to discourage driving can be effective, the one thing that really makes me switch to alternatives is the availability of effective public transport. 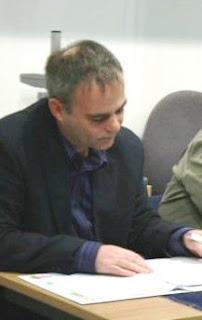 High Speed Rail.
A later question dealt with High Speed Rail; again the Labour line was just how far we had come in 10 years. I could not resist this opening to point out that we had come exactly 70 miles, from the Kent Coast to St Pancras. With no further High Speed Lines planned it was anybodies guess how long we would wait for HS2 and that we had the smallest High Speed network of all the major countries in Europe.

Other questions included the part the international community has to play and how other countries had tackled climate change.
Green Economy.
A question on how a climate change could affect the economy provoked some interesting answers. Ian Davison from The Green Party seemed to think the economy should and would contract. I disagree; a reduction in Carbon should not automatically mean a reduction in the economy if we get it right. It will mean a different economy and by investing in new technology Britain could be a world leader.
How far has Labour Come.
One question from the floor was a direct challenge to Labour to explain what the Government had done to combat climate change during its 10 years in power. I had to correct the Labour representative after she appeared to indicate that Labour’s record was good and we had met all our targets. In fact CO2 emissions are up 4% since 1999 and the Government have admitted that they will fail to meet their target of 20% reduction by 2010.

I did not get chance to mention my favourite quote from Two Jag’s Prescott who in 1997 stated that: “I will have failed if there are not fewer journeys by car. It is a tall order, but I urge you to hold me to that.” Oh well perhaps next time.
Posted by Alan Beddow at 5:16 pm