Labour doing a Ratners on Tax

I have just seen the details of the concessions made by the Government to 'compensate' people who have lost out on their tax policy. It has descended into a complete farce.

The abolition of the 10p rate was designed to help Labour win the election that never was. Now this by-election budget is designed to help them cling on to Crewe in next week’s vote. The Chancellor is desperately trying to backtrack from the disastrous decisions of the Prime Minister but has still hasn’t managed to get it right.
Surely it would be better to admit they were wrong and put things back to how they were, yes it would be a U-Turn, yet if they came clean and admitted they had made a mistake, something the entire country knows anyway, they may be able to claw back some respect. Figures I have seen show that this u-turn leaves 1.1 million of the lowest paid workers losing up to £100 each.
The chart I have included shows that only a small proportion of those affected by the removal of the 1op tax band will be compensated. 1.1 million people earning between just over £6,500 and £12,800 will still lose out. 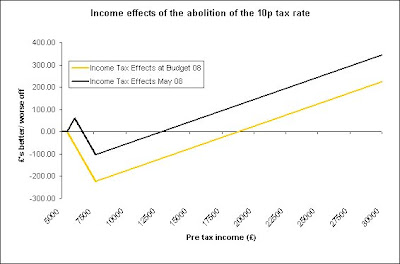 The whole thing has been a total disaster for Labour hitting hardest those that are their core vote. An act of political suicide comparable to 'Ratners Jewelry'.
Posted by Alan Beddow at 8:46 pm