Save the Allotments - Wheelbarrow Walk.

I attended one of the most fun demonstrations this afternoon, the Wheelbarrow Walk to save Leamingtons Allotments from the threat of development. A colourful procession of allotment owners carrying watering cans and pushing wheelbarrows headed down the Parade during a busy Sunday afternoon to the Pump Room gardens. 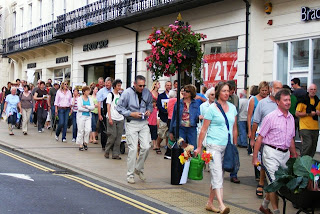 The demonstration was organised after the District Council issued a consultation on possible sites for future development. Residents in Leamington became concerned when Option 1 featured a large arrow pointing right across land where their allotments stand.
I was asked to speak after the demonstration had assembled at the bandstand, along with my colleague Bill Gifford who is one of Leamington's Lib-Dem councilors. 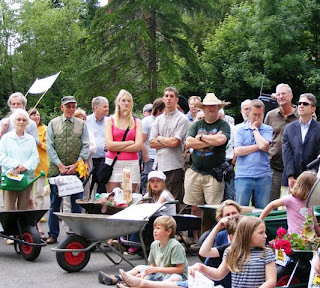 I have written about these allotments before and I really do believe that all our facilities, Allotments, Sports fields, Our Cricket Club which is also threatened with development, parks and open spaces add significantly to the quality of life in our towns. These facilities are used by people of all ages and bring people together.
This is one of the things that I love about living in this area is that we are an integrated community, we do have a wide range of activities and culture. If we destroy these things then we destroy all that makes Leamington and Warwick the towns they are.
If anyone featured in the pictures above has an objection then please email me and I will take it off this page.
Posted by Alan Beddow at 3:32 pm