This afternoon I took part in the ‘Welly Walk’ organised by BLAST (Bring Leamington Allotment Societies Together) to continue our campaign to protect Leamington’s allotments and to protect the greenbelt to the north of the town.
This is in response to Warwick District Councils ‘Options for Growth’ consultation document that placed some of the arrows on their map directly across some of Leamington’s popular allotments. This has naturally raised concern amongst allotment holders who do not want to see their allotments, many who have tended their plots for decades bulldozed to make way for housing.
I visited Binswood Allotments earlier this year and saw for myself what a fantastic source of healthy recreation these plots are. In fact these facilities are in such demand amongst such a cross section of people that there is a waiting list of almost 200 people. Leamington Town Council (Lib-Dem Run) has said that it would support the case for more allotments. You can read the full Town Council proposal here.
There is more at stake here, as green spaces such as our Cricket Pitches, back garden’s and green belt to the north of the town are also under pressure from developers.
The crisis in the housing market does not mean the threat has gone away and plans to be discussed at the District Council will determine where thousands of houses may be built over the next 20 years.
So that is why campaigns such as those organised by the Allotment Holders is so important. Decisions taken now will have an impact to the character of the towns in our District for decades to come.
My personal view and the view of the Lib-Dem’s in Warwick & Leamington is that development should not be at the expense of the facilities in our town. In fact is there is development on the scale proposed we will need more facilities, more allotments so we can maintain our towns as great places to live.
So in spite of the icy weather and the mud, well over 100 of us spent this afternoon walking along the green belt that is at risk. We had a short pause for some speeches before we returned via some of the allotments. 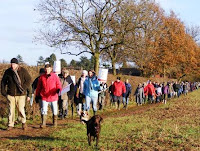 We should not build on the Green Belt to the north of Warwick & Leamington for two important reasons. It forms a natural barrier between our towns and Kenilworth and Coventry to the north, halting the urban sprawl. The area to the north is stunning Warwickshire countryside along the course of the Avon (a flood plain) dotted with little villages. The choice is clear, Urban Sprawl or Stunning Countryside!
Posted by Alan Beddow at 5:57 pm