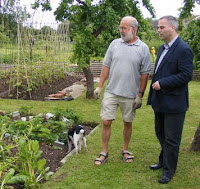 Just catching up on some of the local news. It seems Leamington Allotments are safe from development. Concern was raised when the 'options for growth' consultation placed one of the options for 10,800 new homes right across some of Leamington's fantastic allotments.

Allotment holders across Leamington mounted a solid campaign to oppose this option and it looks as though, in spite of the conservative led District Councils 'gagging order' forbidding local councillors who have suported the campaign from speaking and voting on the issue the allotment holders in Leamington have managed to protect their plots.
That is great news.
Posted by Alan Beddow at 4:26 pm