Well it looks like the Tories are crying wolf again over Warwick Hospital. Having been caught out last December making claims that were simply not true. They have included Warwick in their recent list of hospital’s that may be at risk. (The same list the prompted an apology and then a retraction in Kings Lynn)

Of course the Hospital is one of the most important assets our community has and if I felt it was under threat I would be out there with the Tories campaigning to preserve it along with most of the town. 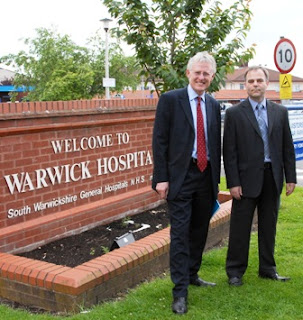 I visited the Hospital last month with our shadow health secretary Norman Lamb and met hospital bosses for a full and frank conversation. A&E and Maternity in Warwick are not under threat and there has been investment in new services at the site especially in Cancer care.

In fact I cannot believe the Tories have made the same mistake twice. This highlights that they are all about spin and chasing headlines rather than tackling real issues. I though spin went out of fashion in British politics when Blair stepped down.

Story in The Courier this week.
Posted by Alan Beddow at 10:52 am