In Praise of Local Tradesmen 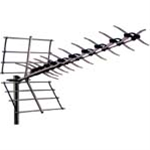 A few weeks ago a bit fell of my TV aerial and so eventually I got around to doing something about it and upgrade to a new digital aerial at the same time.

I call a national installation company who give me what I consider to be a reasonable quote and I book them for this morning.

The installer turned up at about 10am and tells me that the work will cost more than twice what I had been quoted on the phone. He tries to blind me with science, which is never a good idea with me as I have an engineering background. My bullshit detector was going into overdrive.

So I politely decline his offer and then phone a local installer who turns up at about mid-day.

Allen the TV aerial man tells me he installed the whole development where I live when it was built about 15 years ago. He has years of experience on where the best and worst reception areas are in the town and the best transmitters to use to get the best signal. He replaced my Aerial and aligned it to Sutton Coldfield so I now get more channels than I did before, he also gave me some free advice as to how to set up my TV and my various bits and pieces up to get the best signal.

As I was paying him the reasonable amount we had originally agreed, I told him about my experience with the national company. He told me that was a common trick and that an old lady had been charged five times what I had paid to do similar work.
It is so easy for people to get ripped off on technical work like this, especially if you are seen as elderly or can be blinded by science. It is worth using well established local tradesmen as they know the area and it keeps local enterprise alive.
Posted by Alan Beddow at 12:10 pm