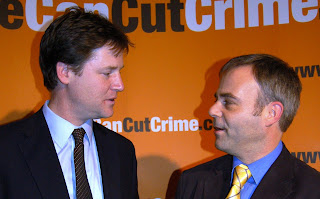 I have read a lot about Nick and Chris over the past few days and believe this is going to be an interesting contest.

I am amused that already the media is trying to dig up the dirt, Chris it seems wrote an article in a student mag in the early 70's discussing drugs and may (or may not) have experimented. Nick on the other hand, as a student burned down a greenhouse full of cacti, the article did not mention whether or not they were hallucinogenic.
Well its probably best to get this all out of the way early on.
A more sinister edge though is the hints by some corners of the media suggesting that Nick Clegg will try to shift our party away from its core values, undermine its structures and is a Tory at heart.
What crap. The truth is that the Tories fear Nick Clegg more than the next flip flop statement from their own leader. If it is put about that Nick is a closet Tory who aims to change the party it is an attempt to create fear in the Lib Dem membership. This is how Nick will be attacked. If Nick does become leader, this will become a theme I fear in months to come as much needed changes are made. If any of us are in doubt about Cl egg's Liberal Credentials, he writes in The Yorkshire Post, "Under my leadership, I want the Liberal Democrats to become a gathering point for everyone who wants a different type of politics in Britain. A politics that begins by giving power to individuals, their families and their communities. A politics which places its faith in people, not systems – in communities not bureaucracies."
We will have to see through these attacks and be bold as Nick says in reinventing the way our party reaches out to people, works internally and gets our message over.
Although I have tried to be objective and not make my mind up until I have heard both speak at the hustings, I am finding that not only am I swaying more and more in favour of Nick, I am excited by it.
Posted by Alan Beddow at 4:54 pm