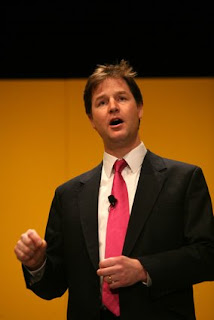 I’ve only just had chance to write about the Lib-Dem conference at Liverpool last weekend.

I have to say I was slightly apprehensive after the events of the week before. I had feared another conference with mutterings over leadership. My fears proved unfounded and I was relieved to note that Nick Clegg mentioned the events in his opening talk at the rally on Friday and even made a joke about it during his closing speech.

I was able to gather some inside information about the rebellion and it seems the whole thing was quite good natured. Some MP’s felt they had to honour the wishes of their constituents in some parts of the country.

Those events aside, the highlights from the conference for me include:

The Health Debate, where we passed amendments to our policy that will ensure we have a greater say in the running of our health service as opposed to the centrally run megalith that it has become. It seems the NHS is now one of the largest, most centrally run organisations, second only to the Chinese Peoples Revolutionary Army, hardly a role model for a progressive democratic British public service.
Vince Cable & The Economy

I enjoyed Vince Cables speech and was able to attend a Parliamentary briefing with him afterwards where he outlined the key challenges to our economy which strongly feature early signs of tightening, increase in home repossessions and bankruptcy. This highlights what Vince has been warning the government of for some years now, the unsustainable rise in personal debt. Gordon Browns economic Miracle has been paid for on our collective credit cards and now we have hit our limit. I do hope that with the shift in exchange rates Britain can muster its manufacturing industry (which still exists in some places) and pull us out of its current difficulties. I would like to see the government do more to encourage this.
(I hope to write more about bankruptcy soon as figures I have seen show an exponential rise since 2001 in the Warwick & Leamington area, a pattern following a national trend, I am waiting for 2007 figures to come out and I will show the full picture.)

Housing
I attended a debate on Housing; again passing changes to our policy that will effectively give local authorities more power to build the affordable housing it desperately needs. Warwick & Leamington have had more than its fair share of new houses, yet with many of the executive style flats lying empty and the four bed double garage properties occupied by commuters, while many people who grew up in the area and actually work here cannot afford to buy a house (including my friend who is a doctor) I do feel the developers have been building the wrong sort of houses.

Paul Holmes who was recently our shadow housing spokesperson spoke with real conviction and having discussed housing with him recently was pleased to hear his contribution to the debate.

On this theme I had chance to discuss this with the lovely Julia Goldsworthy (communities and local government spokeswoman). Julia later gave the first speech I have heard her give at conference, I was quite impressed and am sure we will see a lot more of her in the future. 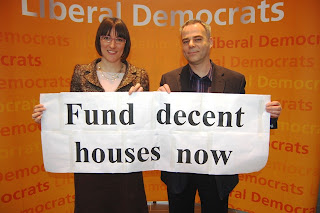 I had a few drinks in the bar with some of the usual suspects from our regional party and was saved from the Glee Club (end of conference party, which an oath of secrecy forbids me from disclosing details, other than to say that you would not believe it unless you saw it) by having dinner with Phil and Penny Bennion at a local curry house.

During his speech I started to see the narrative coming together that we have been developing since a one day conference I attended a couple of years ago in London. There seem to be two strands to this.

1/ Politics is Broken, public confidence in our politicians is at an all time low, following cash for honours, MP’s expenses rows, people feel politicians are only in it for what they can get and voter turn out is at an all time low. Our electoral system focuses only on swing voters in marginal constituencies and there is little to choose from two establishment parties.
(If Gordon Brown had not bottled out of an election in November analysts say just 8,000 swing voters would have won the election. That is less that half the voters in Warwick!)

2/ We intend to change that and fix our political system by bringing democracy closer to us (the people) so we can regain a voice in what is becoming a faceless centralised state.

All our policies based on Liberal principles hang around this theme like a well-tailored suit.

Nick also ruled out doing a deal with the other main parties. A well needed position in my view, which put to rest any speculation of voting one thing and getting another.

I sense Nick has real conviction and the ambition for our party and our country to strike a chord with all of us across Britain.

So all in all a great conference and a solid start to the next couple of years campaigning.
If you want to ask me about these or any of our other policies, or tell me about your experiences or thoughts please email me.
Posted by Alan Beddow at 10:24 pm

Email ThisBlogThis!Share to TwitterShare to FacebookShare to Pinterest
Labels: conference