New Refuse Collections - But for some Rubbish Piling up in the Street. 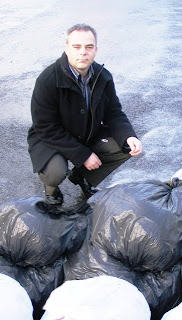 The controversial new refuse collection started this week in Warwick District. Most residents will get new Grey and Green wheelie bins to put their household refuse and garden waste. Collections will be alternate weekly, with one week collecting garden waste and recycling (from the red box) and the other week collecting household waste.

Residents in terraced streets have been able to request a supply of bags if they are unable to store a wheelie bin.

Roads in Chase Meadow left off the list and refuse is piling up in the streets.

A council blunder has left roads in the Chase Meadow development in West Warwick off the list for the new refuse collection. Now that the new service has started rubbish is piling up in the street and residents do not know when it will be collected.

I visited the road on Monday to see for myself and talked to some of the residents.

Residents have received no information about the new service and have put their rubbish out on Tuesday morning as usual. It has not been collected and people are very worried and confused. One resident I spoke to with young children is worried about health risks with the bags outside in the sunshine.

I cannot understand how the council has overlooked these streets. Cllr Kinson who is responsible for the whole scheme is one of the Conservative councillors for this area. Refuse has been collected under the old scheme since homes were occupied in November, people are paying their Council Tax and are even on the electoral roll so its not as if no one knows they exist.
When I contacted the council I was told that bins will be issued shortly though they did not tell me when. Collection in this area will be on a Friday, starting with recycling. This means that refuse will be outside in bags for almost two weeks in the heat. It is simply not good enough!
Posted by Alan Beddow at 12:08 pm

'This means that refuse will be outside in bags for almost two weeks in the heat'
What heat, are you living on a different planet?

Well to be fair when this story broke on Monday it had been a nice warm spring day, the clocks had just gone back and I was feeling optimistic.

We had snow this morning so perhaps you have a point... A.

Quick update on this story. I had an email from some of the residents in these roads thanking me for my help and letting me know they now have bins and their bags have been collected.