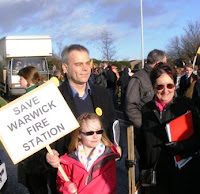 Last week the Conservative Council Cabinet announced delays to the decision to close Warwickshire Fire Stations. With a General Election only months away my fear is this is only a ploy to delay the decision until after the election.
Local people deserve better than an open ended plan to bring proposals back 'some time in the future'. I would like to see these ill thought through plans scrapped altogether. The closures have proved deeply unpopular. Even our own fire fighters and neighbouring fire services have criticised the plan.
Plans put forward by the Conservative cabinet at the county council, would mean the closure of both Warwick and Kenilworth fire stations leaving just the station in Leamington to cover all three towns and surrounding areas.
With consultation on the proposals having closed on 8th December it was intended that the Cabinet would consider the proposals in January and then a final decision on changes would be made at a County Council meeting in February.
That timetable has now been abandoned, but despite pressure from Liberal Democrat councillors at the meeting to scrap the plans altogether no indication was given by the ruling Conservatives as to when plans would be brought back to the Council.
Posted by Alan Beddow at 1:48 pm