Many of us in Warwick attended the Demonstration against the planned closure of Warwick Fire Station today. The proposals are part of a county wide review of the Fire Service. If they go ahead will mean the closure of Warwick and Kenilworth fire stations leaving just Leamington to cover all three towns and surrounding areas. 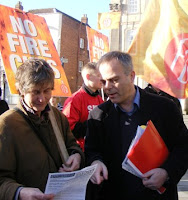 This will impact all three towns.

Everyone I spoke to on the march today are deeply suspicious of the response times between Leamington and Warwick that we were given in the consultation documents. We have every reason to be. Documents unearthed by Lib-Dem councilors across the county, who all oppose these closures show that the risk will actually go up.

You can find links to these documents in my previous posting. Have a read of the risk assessment which paints a very different picture to that given in the documents we were given as part of the consultation.

Given the massive support today I hope the Conservative Councillors on the County Council will see sense, read their own risk report and put an end to these risky plans and keep our fire stations open.
Posted by Alan Beddow at 4:37 pm