I have returned home from this years spring conference in Harrogate. It has been a chance to catch up on some training and some informative fringe events, this year I attended a couple of excellent sessions run by the Youth & Students, one on speaking in schools and colleges, very useful as I am attending a debate run by the North Leamington 6th Form next week and an interesting event yesterday on affordable housing, a particular challenge for young people in Warwick & Leamington. The guest speaker Theresa McDermot from Shelter told us, “The most progress over the past few years on housing has been made by the Liberal Democrats.”

I attended a few debates, the Trident debate I have already commented on and of course the Leaders Speech this afternoon. I felt this was the best speech I have heard Ming give as leader, he seemed a lot more relaxed than he appeared in Brighton in September and I felt the message was tighter and more reflective of the way in which our policies hang together. As I was sitting in a prime location I can be spotted along with Pat Wreford-Bush and Cllr Alan Boad from Leamington in the audience on the BBC coverage. 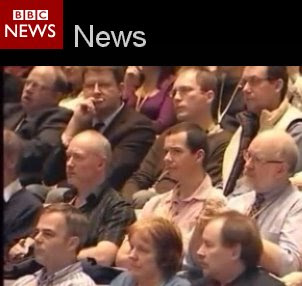 Of course it wouldn’t be a conference without a chance to meet colleagues from around the country in the bar and after spending some of the evening with Mike Dixon and his family, who are from the area I grew up in, I woke with a slight fuzzy head. Some would say I got off lightly.

So its now full steam ahead for the District Council elections in May.
Posted by Alan Beddow at 7:30 pm

Email ThisBlogThis!Share to TwitterShare to FacebookShare to Pinterest
Labels: conference