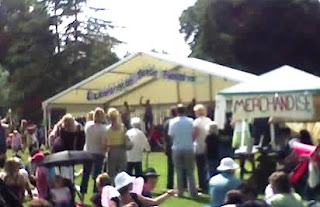 I had a great time strolling round the Leamington Peace Festival this afternoon. This is a fantastic event often hot and sunny each year and today we were very lucky with the weather. I was able to mix two different worlds, Music & Politics.

When I arrived Souler Rhythm were playing on the main stage. I did sound engineering with this band some years ago and we had some great times travelling around the country, doing gig’s in very different places. It was good to catch up with some of them briefly afterwards backstage.

I then did a tour of some of the stalls and was struck by how many campaigns we are involved with in Warwick & Leamington. We seem to have a great sense of political conscience here and play leading roles in so many issues. So it was good to talk to some of these grass roots campaigners and learn a little about the issues they are working on.

The message of the Peace Festival really is that we can make a difference by standing up and being counted, whether by signing petitions or getting involved in campaign groups. It may seem that we individually have a very small voice, yet lots of small voices make one huge one and that really does make a difference.
I then met up with some friends at the main stage to see Satin Dolls, they are playing at the ‘GW Fest’ at my local, the Great Western in Warwick on the 28th July to raise money for Myton Hospice.
Posted by Alan Beddow at 9:46 pm

As a member of the original founding organising committee way back in the early 1970's it is good to hear the Festival is florishing again. Still remember collecting all the trestle tables from all the curch halls in Leamington (Oh the joys of the oversized tables from St Paul's)

Re anon comment... posted on 18/06. Have deleted as this is not the place to have public discussion on this subject. If you wanted to discuss this with me you could have emailed me.

Hey,
glad you enjoyed the 07 festival, hope to see you there again this year - 14 & 15 June 2008, as always there will be plenty of campaigning stalls & talks between the acts.
Peace Fest Committee