Visit to European Parliament and NATO 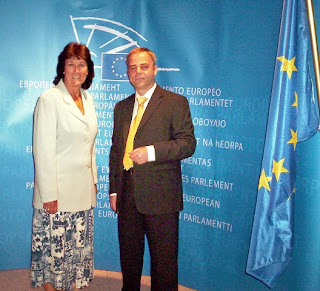 Wednesday and Thursday this week I visited the European Parliament and NATO as part of a delegation from the Liberal Democrat European Group. I had the chance to chat to many of our MEP's including Liz Lynne from Stratford who is the MEP for the West Midlands.

This was an extremely valuable couple of days, which informed me about a lot of the issues we face right across the European region and the leading role Britain plays.

On Wednesday we met a number of our MEPs and were able to have some very open and frank discussions with them. Key discussions include;

Andrew Duff who outlined the political backdrop across member states to the renegotiation of the European Constitution. Andrew was speaking in the debate on the constitution later that afternoon and he invited us to sit in the diplomatic gallery and listen to some of the debate.

Bill Newton Dunn discussed the scale and scope of international organised crime. This issue alone outlines how Europe is a vital part of addressing many of the issues we now face in the 21st Century. If we did not have an EU we would have to create one. One thing is sure, the international criminal gangs are working in an integrated way and our national and international governments need to be doing the same in order to keep up. Bill outlined some frightening facts related to Electronic crime, laptops are now stolen for personal data rather than hardware. Child Porn, The serious issue of Illegal Immigration, People Trafficking with 1/3 of Africans coming to Canary lsles drowning at sea. Bill also outlined the frustrations faced with getting member governmental organisations to work together, often it is the EU that get blamed in the media when it seems to me that one of the challenges Europe faces is that the National Governments of member states not taking them seriously. If they did Europe could achieve so much more.

Diana Wallis - A Vice President of the European Parliament opened up a lively debate on Single Seat issue, or the move of the parliament to Strasbourg each month, Diana also explained how MEP's have always had the sort of transparency our Westminster MP's are trying to avoid with the amendment to the Freedom of Information act.

Thursday we visited NATO where a member of the NATO staff briefed us on how NATO’s role has evolved to meet the changing political challenges over recent decades. NATO 1 was a response to the cold war, which then evolved into NATO 2 in the early 1990’s expanding and embracing former enemies, including Russia who is now a partner. NATO 3 is now responding to a post 9/11 world.

We had a fascinating briefing from a member of the Royal Marines, who explained the challenges faced in Afghanistan. He told us that morale of our forces over there is high, not least because public opinion at home is more in favour of that war than our actions in Iraq. There are massive challenges ahead in Afghanistan. Regardless of the morality of the war in Afghanistan, I am convinced that not only is Britain playing a key role, we are also leading the thinking and in my opinion are adopting a sensible approach to many of the sensitive issues, an approach that might not be adopted if it were left to some of our other leading partners.

A representative from the Home Office and the MOD also briefed us. I asked how Russia’s response to American stationing of their missile defense system in Poland and the Czech republic, in threatening to target European Cities fitted with their role as a partner of NATO. I sensed the question was being evaded and phrased the question again and they admitted that the Russian response was ‘not helpful’.

The past few days have been of immense value in helping us understand the reality of many of the situations we face and how important our role within Europe is to the UK and why we should not dismiss it as being a political sideshow that has little relevance to the security and prosperity of our country.
Posted by Alan Beddow at 1:51 pm