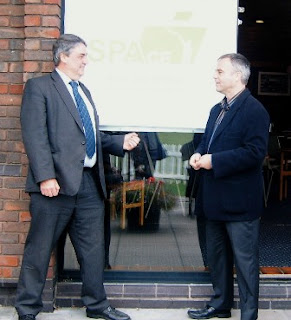 I had some great news yesterday. The results of the Selection for the West Midlands European List were counted.
Now that the selection is over I can be more public in my support for Phil Bennion. I supported Phil as his campaign manager during this contest because I believe that Phil has the Experience, Expertise and Vision to make an excellent MEP, representing the West Midlands in the European Parliament.
I have worked with Phil over the past 12 months and accompanied him on a visit to the European Parliament for briefings with some of our current MEP's in June. Phil plays a leading role in our European Party and is well respected in Brussels and in the West Midlands.
So I was especially pleased that Phil was selected into the number 2 position on our list, which gives him a really good chance of success in the European Elections in 2009.
There has been a lot of debate in recent months about the future of the European Union. Phil's vision for Europe is clear. Europe must step up to the issues that affect us in the 21st Century.

As the candidate already working at the heart of European Politics, Phil is best placed to stand up for our Liberal values within the European Union, make the case for Europe campaigning in our region and fight for the reform that is needed if Europe is to meet the challenges of the 21st Century.
I wish all our candidates the best in the campaign for 2009.
Photo:- Alan Beddow with Phil Bennion at the Launch of Leamington SPAce earlier this summer.
Posted by Alan Beddow at 5:50 pm