Bring back the Chartists. 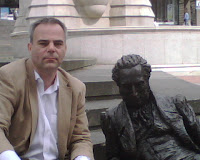 As tax payers we have a right to be angry. I have never had an issue with MPs claiming reasonable expenses. When I travel on business I do the same, some of my colleagues live in rented accommodation in Worcester during the week. Industry has managed to cope with the issue in a manner that reimburses employees for reasonable expenses whilst ensuring no one makes a profit. For a start the inland revenue would never allow it.
In Westminster there has developed a culture of expenses being the right of many MPs. A system has developed that is so lax that it was simply asking to be abused.
A couple of years ago I challenged James Plaskitt MP, in the Courier over his support to MPs exemption to the freedom of information act. James claimed this was to protect the privacy of constituents, a weak claim as constituents privacy was catered for in other ways. I suggested at the time that this was more to protect MPs from scrutiny over their expenses.
I sense this is part of a deeper malaise in British Politics. Since being closer to politics over the past few years as a Parliamentary Candidate I have seen a system that is rotten to the core. Where dodgy funding can buy political favours. Dirty politics to undermine the opposition. Spin and carefully managed leaks, sexed up dossiers to influence public opinion.
Our elected representatives at any level of government should not forget that they are simply that, elected by us, to represent us so that they can take decisions on our behalf, for the smooth running of our towns, areas and country. It is a position of trust and privilege. Recent behaviour shows many treat this with contempt, no wonder Politicians are held in such low esteem.
It is easy to feel disillusioned with all politics, yet British history shows a long tradition of reformers who have successfully challenged the system and corruption from the Magna Carter to the Anti War demonstrations a few years ago.
My Great-Great-Great Grandfather, Thomas Attwood, was one of the founders of the Birmingham Political Union which was foremost among Chartist groups lobbying the government for the passage of the Reform Bill.
Like today Politics in the 1830’s had become corrupt. The aim of the movement was to, "take effectual measures for correcting diverse abuses that have long prevailed..."
Talking to people over the past few weeks, campaigning for the county elections it is clear, people are so disillusioned with politics in this country that we need a radical new Reform Bill to clear out the rot and build a parliament fit to govern this country in the 21st Century.
Picture - Alan Beddow with the statue of his Great-Great-Great Grandfather, Thomas Attwood MP in Chamberlin Square, Birmingham.
Posted by Alan Beddow at 1:49 pm

Of couse, though the chartists wanted MP's to be paid so that the house of commons would not be full of fat cats with an agenda.