Its only because we are Jealous of MPs large houses it seems. 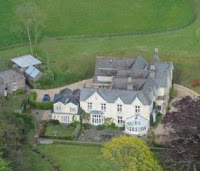 Tory grandee Anthony Steen claimed yesterday that he was the victim of "jealousy" among his Devon constituents who were envious of his large house. He said: "What right does the public have to interfere with my private life? None. You know what it's about? Jealousy. I've got a very, very large house."
Steen is clearly so out of touch with the constituents in his ‘safe’ seat, he may as well be living in a second home on Mars.
The public couldn’t care less about the size of his house…. It’s our having to pay for it and the 500 trees we had planted for him in its parkland we mind.

Picture - Steen's house and some of the trees we bought for him.
Posted by Alan Beddow at 2:30 pm