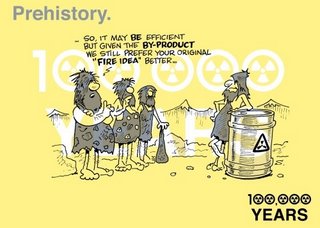 This is a debate that is starting to gather momentum.

There are many arguments for Nuclear power, on the surface it may seem to be a clean, efficient, carbon neutral solution to our energy problems. It is true that technology has moved on in the half century since the first power stations were built.

There are many arguments against, such as safety, radiation fears for those living nearby and the threat of terrorism, however there are two key arguments that clinch the argument for me.

Firstly our nuclear industry has left us with a massive clean-up bill for historic waste of Â£56 billion and rising.

Secondly for a fraction of the cost of building the new nuclear power stations we would need could be used to build a range of different renewable power facilities across Britain in less time than it would take to build the Nuclear option.

This would have an added benefit in placing Britain at the cutting edge of the growing market in renewable technologies that would revitalise our industry.

By having a little imagination we can create something with a positive lasting legacy, rather than a huge cleanup bill for future generations.
Posted by Alan Beddow at 11:29 pm

I have to wonder whether the cost is worth it though.
If only we could come up with a good way to ensure that the tax payer doesn't have to foot any of the bill...

When it comes to renewables, I do think there's a lot of doubt as to whether they can provide the necessary reduction in greenhouse gas (and other harmful) emmissions.
I live in hope that developments will be made which make renewables viable on a large scale and help reduce harmful emissions from standard power stations.

The easy way to establish whether the cost is worth it is to ensure that the entire cost is borne by the nuclear industry.

I strongly suspect, however, that such investors don't exist.

As a member of Hinkley Point power station development team in the 70s, I am apalled that nulab are poised to repeat the mistakes of our Magnox and AGR programmes.
I have not heard mention of the Thorium based nuclear cycle. Advantages? Inherently stable(and safe), adopting this approach could eliminate the need for head-scratching about 'high level' waste disposal.If India can do it; why can't we?
Disadvantages?
Thorium based reactors can't produce the 'stuff' needed for the shiny new Trident.

We are on our standard grade in school at the moment and we need to come up with a reasonable explanation of our opinion. We are going to be debating in class over this particular matter. I think we should not build any more Nuclear Power Stations as the radioactive waste is already higher than expected, supposedly it causes cancer and i agree the cost would be too high. Yes it doesn't contribute that much to the greenhouse effect but it is affecting other peoples day to day lives. I know that if they were to shut a few down, there would be great amounts of job losses but we have to think, is it worth it?