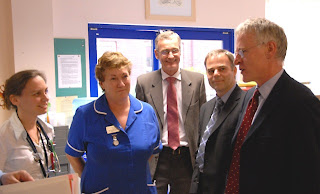 Alan Beddow (second from right) and Norman Lamb MP (Right) talking to staff at Warwick Hospital.
I visited Warwick Hospital on Tuesday with Norman Lamb MP who is the Liberal Democrat Shadow Health Secretary. We had the opportunity to talk to Chief Executive, Glen Burley and Trust Chairman Graham Murrell to discuss the recent challenges the hospital has faced following its record £13.8M debt last year and the hospitals plans for the future.
Now there was a media storm some months ago along with some wild statements made by some of my political opponents which I can only describe as scaremongering.
Of course the hospital has faced serious challenges many created by the constant reorganisations and changes in government policy. There has been cost cutting and the hospital should never have been put in the position it has been.
I know from talking to people who work in the hospital that they have faced a very stressful time. I have the utmost respect for our local health professionals and it is largely due to them that the hospital has managed to turn this situation around.
So I was encouraged by our meeting with the hospital bosses on Tuesday, the debt has not gone away, rather has been refinanced which does spread the problem a little and the finances of the hospital are in a far better state.
More encouraging are the exciting plans in place that will secure the hospitals future on the Lakin Road site. Warwick Hospital plans to develop an ambulatory cancer unit, which will make treatments more convenient for patients in the area. The new centre is set to become the first in the country to receive the Macmillan Charter Mark for Cancer care. The hospital also plans to provide a new paediatrics unit on the site.
Norman Lamb agreed that the hospital has had a difficult year managing its debt and coping with constant government reorganisations. He agreed that the hospital must be commended for turning around the financial situation. Norman recognised that this required some tough decisions and it has been a difficult time for its staff. He was especially interested in some of the new plans for the hospital and agreed that the future now looked more secure and will deliver quality services to patients from the Hospital.
There are still issues with healthcare locally and I will be spending some time over the coming months talking to people across Warwick & Leamington to understand the full range of their concerns.
The hot issue at the moment is that many doctors’ surgeries are no longer taking blood samples and some patients now have to travel to the hospital for this service.
On the whole though the picture is encouraging and I am happy to report that Warwick Hospital is not going to close, A&E will remain as will Maternity and a full range of services.
If you have concerns about healthcare or the hospital please email me

Mail Me about this issue.
Posted by Alan Beddow at 2:27 pm