Yesterday morning I went to have a look at the new road marking in Guy Street in Warwick. This is in preparation for the new Decriminalised Parking that will come into force next month.
Now the streets in this area, Guy Street, Cherry Street and Broad Street are popular residential streets of Victorian terraced houses. Each house is about the width of the length of a car. So it does not take a genius to work out that if each household has one car, there will be only just be enough spaces for all the cars.
Local residents have told me that plans were for double yellow lines to be painted along one side, and that is what I found when I arrived. This halves the parking spaces for these roads with no realistic alternative as to where people can park. 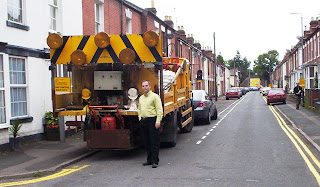 Now the roads here are narrow, yet for as long as I have lived in the area residents have managed quite well by parking on both sides, part on the pavement (that appears to be allowed in other local streets where marked) and still have space for service and emergency vehicles.

One proposal residents would like considered is to make each of the roads one way and for careful marking of parking bays on each side of the road part on the pavement to allow enough room for pushchairs. It will be tight of course, yet residents would be happy with this.

This was discussed at the Warwick Area Committee on Tuesday night and I hope that changes can be made before it is too late.

There is one glimmer of hope if changes cannot be made before it comes into force. There will be a review of the impact following the start of the changes and there may be an opportunity to rethink the parking in these roads then.

Of course in the short term this will not help residents who will simply have no where to park.

If you are affected by these changes in these streets or anywhere else in Warwick & Leamington please email me.

Details of the changes can be found on the Warwickshire County Website.
Posted by Alan Beddow at 3:40 pm