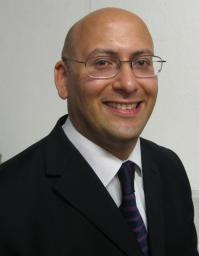 Nigel Bakhai the Lib-Dem Candidate for Ealing Southall.
On Wednesday I headed down the M40 to lend a hand in the Ealing and Southall by-election. Every time a by-election is called recently I cant stop remembering 'the only gay in the village' Dafid's line in Little Britain. "Its not just a by-election, us gays and straights can stand as well you know!"
Heartened by this and the news that the wheels had come off the Tory campaign so early in the contest, (having selected a candidate who had joined the party milliseconds before, thus alienating many of the local activists.) and ignoring my sat-nav as it tried to funnel me onto the M4 (yea right!) I trundled down to Southall.
My earliest memory of Southall was in the 70's aged about 7 sitting in the back of my parents car. I remember passing a large park that was packed full of Indians with turbans. Coming from a small village in Worcestershire where the nearest thing we got to an ethnic mix was my friend at school who had been on holiday to Spain that summer, I was fascinated by the colourful sight.
Southall had not changed much and I passed rows of interesting looking shops many with piles of fresh fruit and veg lining the pavement. A Tory radio car passed, I have not seen one of these for years. It announced a simple message, Vote Conservative for Family Values, Vote Conservative for Lower Crime. How they were going to achieve this was unclear.
My sat-nav, having recovered from my ignoring its instructions earlier had caught up and led me to the campaign HQ on a small industrial estate near the station. Like all Lib-Dem by-elections it all seemed incredibly well organised. I teamed up with three people from Simon Hughes office and armed with a huge pile of newspapers and a map we headed out to deliver.
We dodged the rain throughout the afternoon and managed to deliver seven rounds. The problem with delivering newspapers is that your hands get covered in print.
I really think we can win in Ealing and Southall, we have an excellent candidate in Nigel Bakhai and hope to help out again before the end of the campaign.
Oh, this Blog is worth a read Ealing Southall Watch.
Posted by Alan Beddow at 3:14 pm

Good post. Sadly I fear we've made a bit of a mistake with Nigel and this isn't just me saying it but my friends from Southall too.

For one thing he's not a Sikh. For another he's hardly inspirational.

Tony Lit on the other hand is a bit of a local celebrity and unusually for the Tories they seem particularly well organised this time round.

Sad to say, because I'd like to see a LibDem win here, but we're living in cloud cookie land I'm afraid.

Anonymous who I suspect does at least have dry ink on his Tory Membership card suggests I wont publich his propaganda sorry erm post.... Alan.

It's great that you delivered all those leaflets. Thank you. There are plenty more to go out again - and the weather is now lovely and sunny if I can tempt you to come back once more.